Number Crunching : Join me as I look into the ‘under the hood’ numbers in City of Heroes/Villains.
Originally posted on Limited Edition (Jan 16th, 2009) 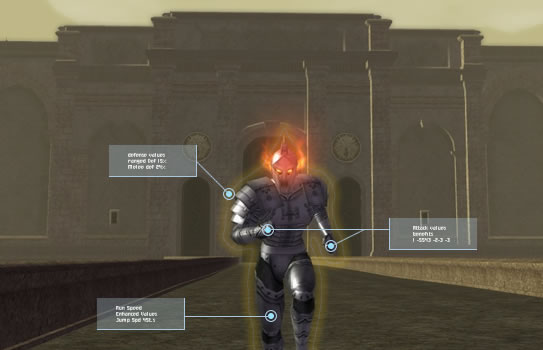 I’ve wanted to write a post regarding the Combat Attribute system for sometime, I thought what better than making it my first post for the Limited Edition website.

During February of 2008, the detailed world of in-game “numbers” was unlocked to the players of City Heroes, at first I didn’t think it was all that important, I have reversed that opinion quite considerably in the last year and I shall show you why.

There were two related features that were introduced to help out players, I’ll discuss each and how you can use each advantageously. 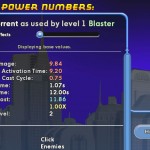 First up are the power numbers panels that allows a player to instantly see how a power is composed and if it is one they wish to select. The option to view Power Numbers were introduced at various locations in the game such as the character creation panes/ level up screen and enhancement screen. Before the introduction of this feature, players had to guesstimate from the powers description (or use a 3rd party tool) to determine the functionality of a power.

You can access the Power Numbers by looking for the “Show Detailed Info” button that will appear whenever you are looking at your powers in the enhancement screen. Additionally you can see the details on any power you own or used on you by just right clicking them.

The second feature was one that massively altered the way many people gamed, the appearance of the Combat attributes screen and monitor box allowed players to see all the information that had previously been hidden.

It’s worth noting that introduction and use of these tools also enable the resolution of niggling power/enhancement bugs that had gone unnoticed or untraceable beforehand.

You can access the main combat attribute window by clicking on the “Powers” button located just above the power trays, at the top of the new windows that appears you will see the text Combat Attributes that you will need to click.

There are 7 sections of different information but the top one labelled “base” is the one you’ll want to check-out to start with as it contains some of the most important attributes.

Each attribute shows the base values and any modifiers that enhancements provide to an attribute, you can hide these additional number if needed by right click anywhere inside the panel and choosing “Hide power sources”.

Depending on your characters archetype and your style of play there are numerous choices you will want to look at and monitor. You can track up-to ten different Attributes outside of the main window by right-click the one you want and selecting “Monitor”.

Here are are some ideas of attributes you may wish to monitor on your characters.

So if you are looking for a vital piece of information or you just want to have a nose around, check out the combat attributes and see the inner-workings of your character.